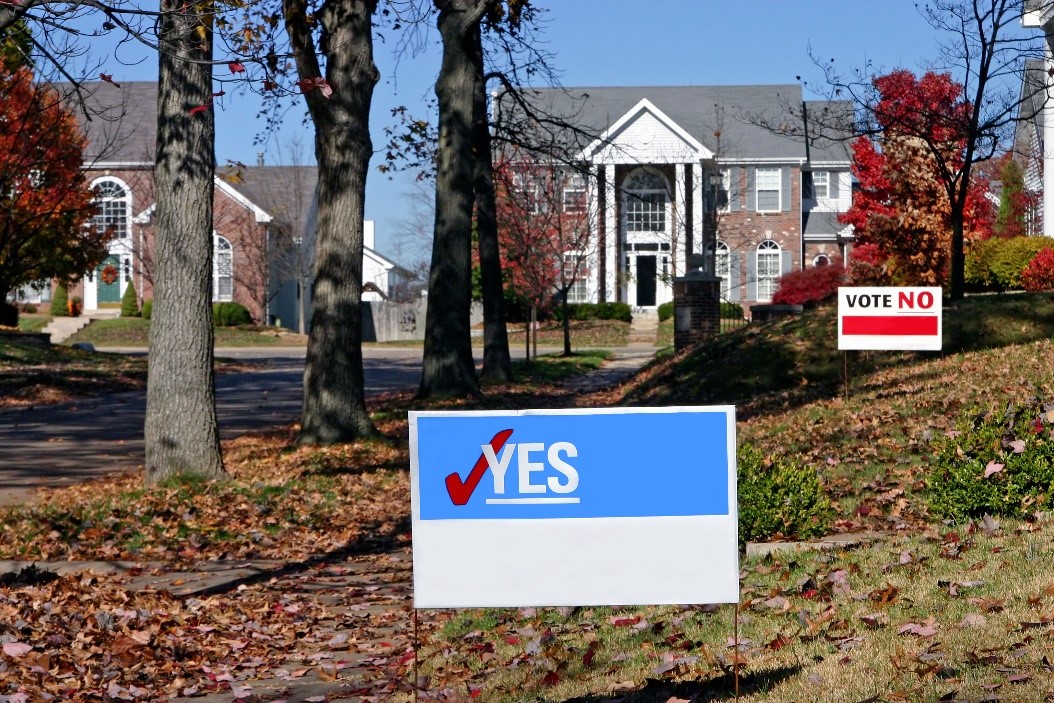 Can Our Community Restrict Political Signs

Election season is here and already raising many questions regarding a community’s authority to restrict political signs. If your community has a prohibition on signs, political signs are not exempt from those restrictions.  The question then becomes does enforcement of no sign restrictions as to political signs violate an owner’s right to free speech.

In Quail Creek POA v. Hunter, 538 So. 2d 1288 (Fla. 2nd DCA 1989), the 2nd DCA held that the enforcement of a community association’s covenants in state court did not create a sufficient nexus to evidence “state action” such that the First and Fourteenth Amendment would apply.   At least one court has ruled that Florida homeowners’ associations are not state actors. Brock v. Watergate Mobile Home Park Ass’n, Inc., 502 So.2d 1380 (Fla. 4th DCA 1987). Owners give up certain liberties when living within a community association. However, any sign prohibition must be equally enforced. There is no margin for error.

The above is not meant to suggest counter arguments do not exist.  Some attorneys argue that when a community association seeks a court to enforce a sign or flag restriction that constitutes state action.  The argument goes that the association is invoking the aid of the state to enforce the use restrictions in its declaration by way of the courts of the State of Florida. Therefore, they argue, the Fourteenth Amendment’s equal protection clause can properly be invoked.

This argument has, at least, some support in case law: See, Shelley v. Kraemer, 334 U.S. 1 (1948)(state enforcement of racially restrictive covenants violates equal protection clause); Franklin v. White Egret Condominium, Inc., 358 So. 2d 1084 (Fla. 4th DCA 1977), aff’m, 379 So. 2d 346 (Fla. 1980)(“So long as the objectives of these types of agreements are effectuated by voluntary adherence to their terms, it is clear that no action by the state would be involved, and therefore no constitutionally protected rights can be said to have been violated. … When the appellee as plaintiff below sought to invoke the powers of the trial court … it invoked the sovereign powers of the state to legitimize the restrictive covenant at issue.”)

Florida courts have on many occasions recognized that restrictive use provisions of a declaration may be challenged on constitutional grounds. Indeed, unconstitutionality is one of the few bases for challenging a use restriction set forth in a declaration. See, e.g., Pearlman v. Lake Dora Villas Management, Inc., 479 So. 2d 780 (Fla. 5th DCA 1985) (declaration prohibiting all children under sixteen from permanent residence, except children of transferees from an institutional first mortgage, violated equal protection by its arbitrary treatment of two classes of grantees and was thus unenforceable); Hidden Harbour Estates v. Basso, 393 So. 2d 637 (Fla. 4th DCA 1981) (restrictions in the declaration have a strong presumption of validity and will not be invalidated except where “they are wholly arbitrary in their application, in violation of public policy, or … they abrogate some fundamental constitutional right.”) However, the holding of a court’s enforcement of racially discriminatory restrictive covenants constitutes state action has not been extended beyond the context of race discrimination.

If your community pursues enforcement options that do not include seeking a court order (i.e., demand letters, fines, suspension of use rights, etc.), it is on firm footing to enforce the sign prohibition against political signs.  Additionally, based on the holding in Quail Creek POA you should also be able to obtain an injunction without running afoul of constitutional concerns, but be cognizant that there are counter arguments that have some support in case law. If your community decides to pursue an injunction or other relief in court, it should carefully review the matter with legal counsel before proceeding.

Finally, in determining what enforcement action to pursue, communities should recognize that the election season will conclude soon, and the signs will likely come down. Therefore, the issue may self-resolve before any court action would reach a determination on the merits. Additionally, these are the types of cases news organizations love to write about.  A practical consideration that should be taken into account.