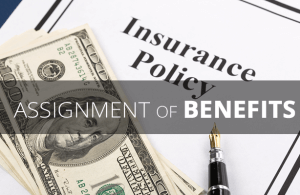 If your Association has suffered a property damage loss, chances are the Association has been asked to execute an Assignment of Benefits (“AOB”) by a vendor. An AOB is a document signed by a policyholder – in this case the Association – that allows a third party, such as a plumber, contractor, roofing company, or water extraction company, to “stand in the shoes” of the insured. The third-party vendor assumes the rights, benefits, and interests of the insured under the subject insurance policy, to the extent allowed by the language of the AOB.

Note that the far-from-exhaustive list above does not include something very important – the Association’s duties as a policyholder. Even if an Association executes an AOB assigning all its rights, benefits, and interests under its insurance policy to a vendor, the Association, as the policyholder, will most likely still be obligated to perform its duties under the insurance policy. “Under Florida law, the assignment of a contract right does not entail the transfer of any duty to the assignee, unless the assignee assents to assume the duty.” Shaw v. State Farm Fire and Casualty Co., Case No. 5D07-3136 (Fla. App. 5/7/2010) (Fla. App., 2010). Essentially, the third-party vendor receiving an AOB is assigned the rights and benefits under the insurance policy, but the Association is held responsible for performing any duties under the policy. The specific duties of the insured are listed in the policy itself. These duties may include, among other things, an obligation to cooperate with the insurance company in an investigation of the claim or to provide a sworn statement of loss.

In some circumstances, executing an AOB can be beneficial to the insured such as in a doctor-patient relationship where the doctor seeks payment for some or all of the services directly from the patient’s health insurance carrier. However, in situations where an Association requires repairs to various community areas, and especially where those repairs involve services from several different vendors, such as plumbers, landscapers and contractors, an AOB may cause more harm than benefit. The Association could unwittingly give up control of the claims process, the selection of vendors, oversight of the scope of the claim, the right to communicate with the insurance company, the ability to endorse insurance proceeds and manage how funds are spent, and so on. Additionally, many AOB agreements also include language that holds the Association liable to the third-party vendor for any costs or services rendered that the policyholder’s insurance company does not cover. If the vendor has commenced work prior to a coverage decision from the insurance company, a denial of the claim may result in the Association being left holding the bag. If subcontractors hired by the vendor are not paid, the Association may find itself with liens against the community property, and possibly against the Association’s bank accounts.

The Florida Legislature has taken notice of the wide-spread abuse associated with AOBs, including inflated claims and ever-increasing lawsuits for insurance proceeds. The Florida Office of Insurance Regulation (FOIR) published its Report on Review of the 2015 Assignment of Benefits Data Call on February 8, 2016. The report studied homeowners’ water damage claims and found that claims where AOBs had been executed involved a higher severity of damages than those without AOBs. The FOIR’s 2017 Report, published on January 8, 2018, found that claims involving AOBs had a higher severity of damages, generally at least 85% more. The report also found that the use of AOBs has increased from 5.7% in 2010 to 15.9% in 2015. According to the Florida Department of Financial Services, there were 405 AOB lawsuits across all 67 Florida counties in 2006, and by 2016 that number had risen to 28,200.

In its efforts to hire vendors to complete necessary repairs, your Association will invariably encounter vendors that require an executed AOB in order to take on the project. Sometimes, vendors will ask the Association to execute an AOB before the scope of work or the estimate has even been provided. Often, AOB agreements are irrevocable and the Association will not be able to walk away from the agreement. An AOB is never required. A policyholder can always elect to file a claim directly with its insurance company.

Before your Association signs on the dotted line and relinquishes its rights under its insurance policy to a third-party, it is important that you consult with your Association’s attorney so the Association can make an informed decision about what potential risks and benefits are involved and the AOB can be limited to the extent necessary.